This website is for Marston's PLC. If you were looking for beers or breweries please visit Carlsberg Marston’s Brewing Company: www.carlsbergmarstons.co.uk

Marston’s has secured a deal with Moving Mountains®, the ground-breaking British brand leading plant-based innovation into unimagined territory, to supply its B12 Burger™. It will be the first national pub chain to sell the B12, the UK’s first meatless ‘bleeding’ burger, which sizzles, smells, tastes and bleeds like meat but is completely plant-based.

The new supply deal, which is projected to grow Moving Mountains’ revenue by over £1m, will see 413 Marston’s food pubs nationwide add the British plant-based ‘meat’ burger to its menu, allowing more people than ever before to bite into the future.

Moving Mountains has spent more than three years developing the plant-based burger with a team of leading scientists, chefs and farmers with over 200 test kitchen recipes to create the final product. The company believes this is set to be one of the most impactful food inventions of the century. The million pound contract is expected to see the Chiswick-based business grow substantially over the next 12 months.

The burger, which contains 18g of plant protein, uses natural ingredients, incredible scientific processes and confidential technology to make the burger replicate animal meat in every way. It features oyster mushrooms, pea protein, oats and Vitamin B12 amongst other plant-based ingredients* (see notes to editors).

Marston’s and Moving Mountains are responding to the UK’s significant shift to vegetarianism, pescatarianism and the new flexitarian diet. There are an estimated 22 million flexitarians in the UK and over a quarter (28 per cent) of meat-eating Britons have reduced their meat consumption in the last six months .

Nicola Arrow, Marston’s Senior Food Development Manager comments: “We have listened to our customers and taken the growing demand for healthier and alternative options across the pub sector as a great opportunity to develop and update our menu. We wanted to find the right supplier for this home-grown product and we believe we have found a great partner in Moving Mountains. It is an exciting opportunity for us to work with a new British business, which is at the forefront of real change.

“The Moving Mountains B12 Burger is such an innovative addition to our menus. It not only caters to our vegetarian and vegan customers but also to those who are trying to make more conscious health or ethical choices when eating out.”

Simeon Van Der Molen, CEO of Moving Mountains added: “We are delighted that Marston’s has chosen us to supply our B12 Burger across the whole of the UK after tasting the product and recognising that they had to be the first major chain to roll out this revolutionary food item.

“Moving Mountains is a British business building an exciting brand at a time of great change in how and what we eat. This marks a huge leap in innovation for humanity and will allow consumers to bite into a future that is better for their health and the health of our planet. We can’t wait to hear feedback on the B12 Burger from Brits across the country.”

Moving Mountains B12 Burger will be available from Wednesday 5th September, nearest stockists can we found on nomeat.marstons.co.uk and movingmountainsfoods.com 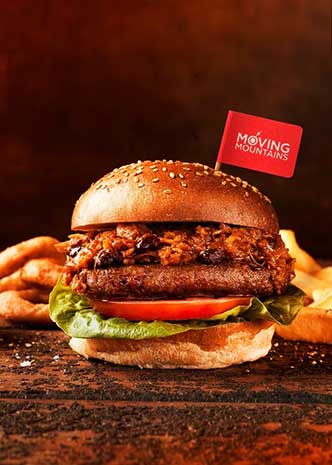 We'd like to know more about the pages you visit on our site and show relevant offers based on those pages. If you're happy for us to collect this information please click accept. Our full Privacy policy can be found here.